Art can often come from the most unlikely places, from the vision and skill of the most unlikely people. And yet there is a noteworthy tradition of self-taught American artists. Their art is often called â€œPrimitiveâ€ â€“ a link with Paleolithic sculpture or the art of those who crafted Alaskan totem pole or the more recent, more modern genius of the French artist Henri Rousseau. 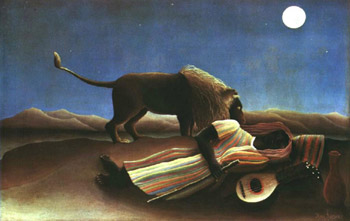 Sleeping Gypsy, 1897 Henri Rousseau (1844-1910)
Although Rousseau yearned to be accepted by the academy, he worked most of his life in the Customs Office in Paris. He began to paint in his spare time and retired at the age of 49 to paint full-time. His combination of naÃ¯ve realism and convincing innocence brought a unique dreamworld to life. And it is the fact that his art came to the fore independently of formal training, and apart from mainstream tradition that he is recognized as a Modern Primitive.

Of course there is a continuing tension between the rigorous, often restrictive standards of the well-established academy and art establishment and those who come to create art with seeming spontaneity and inspiration. These â€œprimitive artistsâ€ live outside what Charles Russell calls â€œthe consensus of the art world â€“ the dealers, collectors, critics, art historians, galleries, museums, and a significant number of artists.â€

The populist movements of the 1930s ushered in an appreciation for a more egalitarian art, produced not by the few well-trained but by the common man. Joseph Pickett, Morris Hirschfield, John Kane, Horace Pippin were a few of those â€œpopular artists.â€ Hirshfield, for example, a Polish immigrant living in New York City, retired from manufacturing clothing and began painting as a pastime. 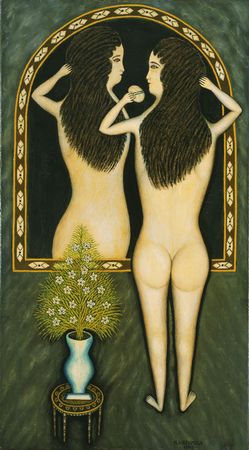 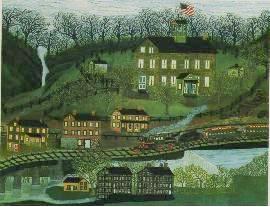 As Russell notes self-taught artists were re-classified as â€œfolk artistsâ€ in the 1960s and 70s, emphasizing the â€œprimitiveâ€ and â€œnaÃ¯veâ€ in their work rather than the â€œpopularâ€ or independent spirit of their work. For many, artists like Grandma Moses, Jack Savitsky and Clementine Hunter evoked a kind of sentimental appreciation of a simpler, almost mythological American past. 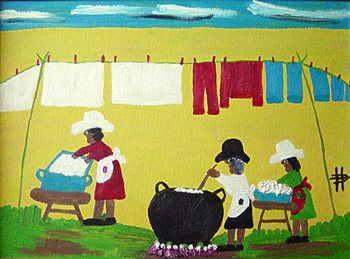 Clementine Hunter “Washdayâ€ c.1970 Oil 18″x24″
Clementine Hunter is a self-taught artist primarily classified as a folk artist. Born in 1886 on a plantation in Louisiana. It is said that in 1940, Alberta Kinsey, a New Orleans artist left some paints and brushes behind on one of her visits to Melrose LA in about 1940. Clementine, who had at this time turned from work in the cotton fields to work in the kitchen as the cook at Melrose, found the paints and brushes and asked permission to paint a picture of her own.

Russell continues: â€œthe adoption in America of the term Outsider Art during the 1970s and 1980s offered a way of discussing the creations of those untrained artists whose work is more self-enclosed, obsessive or simply idiosyncratic than the art of those believed to be rooted in traditional, collective supposedly â€˜folkâ€™ traditions.â€

For David Eddy, before there were art dealers anxious for more work, he was a hard-working roofing contractor who loved spending rainy days with crayons and chalk.

In Larry Zingaleâ€™s case, art followed love. In Copenhagen, his visa expiring, and unwilling to leave his girlfriend, Zingale enrolled in school. Today you can find his paintings in the Museum of International Folk Art, Sante Fe, The Nelson Rockefeller Collection, the Fenimore House Museum in Cooperstown, N.Y., and the private collections of Joan Baez, Paul Simon, Peggy Noonan and Joel and Kate Kopp.

As Michael Ulick, co-owner of Church Street Art Gallery puts it: â€œWhatever the particular and unique aspects of their backgrounds, both Eddy and Zingale are â€˜self-taught.â€™ But itâ€™s important to understand that â€˜self-taughtâ€™ artists can be extremely sophisticated and skilled. A critical difference is that the best of self-taught art comes from a deep place in the soul â€“ it is instinctive rather than intellectual.â€

David Eddyâ€™s paintings are full of passion and a raw energy. His semi-abstract figurative compositions are personal and autobiographical. Much of his work focuses on his life in Warwick, N.Y. and his family, dog, barn and salt-box house.

Luckily his girlfriend, now his wife, saved those early crayon and chalk drawings Eddy made during his roofer years. One day the artist, Alex Echo, saw them and encouraged Eddy to continue. The next day, Echo appeared with three bags of painting supplies. Eddyâ€™s initial attempts at painting were frustrating but he soon found joy moving paint about the canvas, one color colliding with another; smearing, brushing, rolling and pushing the paint until something attracts him.

“My painting is a gift,” says Eddy, “a result of circumstances I could never have predicted or dreamed. I have embraced it with all the passion and energy that I own. I now know what I want to be when I grow up.”

The New York Times referred to Eddyâ€™s naÃ¯ve sophistication as â€œreminiscent of Paul Klee.â€ In addition to his appearance this August in â€œModern Primitivesâ€ at Church Street Art Gallery, he will have solo exhibits in Kent, CT, Provincetown, MA, Los Angeles, CA, New York City, Beacon, and Hudson, NY. 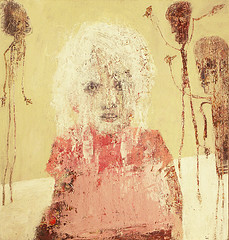 Girl by David Eddy
â€œAmerican Folk Art in The Twentieth Centuryâ€ (Rizzoli, New York) calls Larry Zingale “one of the outstanding self-taught artists of the twentieth century.” He is listed in â€œWho’s Who in American Art.â€

A â€œself-taughtâ€ Berkshire artist, his paintings have sold through Sotheby’s Auction, New York. â€œLike Rousseau, perhaps the most famous â€˜primitiveâ€™ artist, Zingaleâ€™s work is deeply imaginative and dreamlike,â€ commented Michael Ulick. â€œHis work embodies the dynamic combination of the primitive and modern. Itâ€™s why we chose to call the show â€˜Modern Primitives.â€™â€