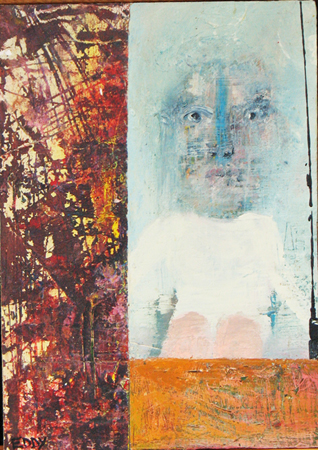 LENOX, MA: In the rich tradition of iconoclastic, self-taught artists, two of the most exciting current practitioners are David Eddy and Larry Zingale, who both live and work in the Berkshires. Their art is often called “Primitive” linking them to Paleolithic cave painters or to the more recent genius of self-taught artists like Henri Rousseau.

In the footsteps of Rousseau, Paul Klee on through Milton Avery, we find that Eddy and Zingale succeed in combining naïve realism and a studied guilelessness. And because their art came to the fore independently of formal training, they are given the distinction of being “Modern Primitives”.

These are painters who thrive on the continuing tension between the rigorous, often restrictive standards of the art establishment and those who come to create art with seeming spontaneity and inspiration. They live outside what Charles Russell calls “the consensus of the art world.

Church Street Art Gallery celebrates this truth with an exhibit featuring David Eddy and Larry Zingale, whose work may contrast, but whose inspiration follows this rich tradition.

They both came to art in unlikely ways. For Eddy, before he was a hard-working painter with art dealers anxious for more work, he was a hard-working roofing contractor who loved spending rainy days with crayons and chalk. The New York Times referred to his naïve sophistication as “reminiscent of Paul Klee.” His semi-abstract figurative compositions are created with passion, exuding raw energy and his paintings have an encaustic quality to them. “My painting is a gift”, says Eddy, “a result of circumstances I could never have predicted or dreamed.” Recently Eddy’s work has been exhibited at the Julie Heller Gallery in Provincetown, MA, the Jan Baum Gallery in Los Angeles, CA, the Modern Primitive Gallery in Atlanta, GA and now at the Church Street Art Gallery in Lenox, MA.

In Larry Zingale’s case, art followed love. In Copenhagen, his visa expiring, and unwilling to leave his Danish girlfriend, Zingale enrolled in art school. After a few classes he felt restricted and decided to teach himself to paint instead. Today, Zingale is considered “one of the outstanding self-taught artists of the twentieth century” by the definitive book, “American Folk Art in The Twentieth Century”. His work is defined and illustrative, polished and colorful and full of fanciful imagery. You can find his work in the Museum of International Folk Art, Sante Fe, The Nelson Rockefeller Collection, the Fenimore House Museum in Cooperstown, N.Y., and in well-known private collections.

As Michael and Denise Ulick, co-owners of Church Street Art Gallery put it: “It’s important to understand that ‘self-taught’ artists, such as Eddy and Zingale, can be highly sophisticated and skilled. The critical element in the best of self-taught art comes from a deep place in the soul – it is instinctive rather than intellectual.” [continued on next page]

The exhibit opens Friday, August 3rd at 11AM with an opening reception that day from 5-7PM and is on view 11AM to 5PM daily through Thursday, August 30th.

The Church Street Art Gallery is owned by Michael and Denise Ulick, and has been exhibiting Self-Taught, Outsider and Folk Art in the Berkshires since 2003.

One of the best things about having your own gallery is knowing that you are bringing something new to your community, sharing something that moves you, with your friends and neighbors.

One in a while we indulge ourselves and host a show with the art we love to surround ourselves with. We love Paul Jervis work. And even though we had a show of his work only last year, well, the fact is, we missed seeing his paintings. Call it an encore, if you will. We just had to bring Paul back on stage.

Plus last year’s exhibition of Paul’s work was so well received we expect you’ll be glad to see what he’s up to.

Paul combines traditional skills with a distinctly modern sense of irony, it invites you to see familiar objects with an entirely new vision.

Some examples: bar glasses become important objects objects. Flowers atop photographs and envelopes develop a surreal, Magritte-like counterpoint. A No Parking sign appears like a gem in the dusky landscape.

No Parking, 11″ x 14″ – oil on canvasOne reviewer of last year’s show put it this way, the effect of combining formal beauty with informal subjects can be delightful, and even a bit surreal, implying that there is more going on than meets the eye.

What we love is how the everyday becomes imbued with greater significance. Paul has a way of taking a table, a dinner dish and a cup of coffee, and suggesting a story we all understand. And somehow it is important to us without ever being heavy-handed. 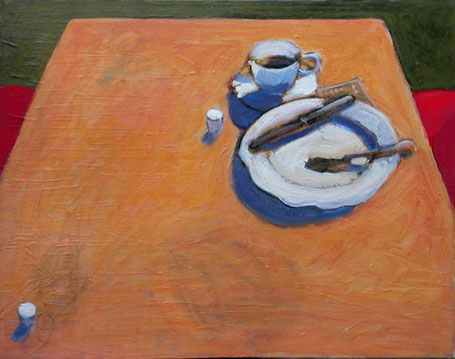 Diner, 22″ x 28″ – oil on canvas
Paul combines that kind of sense of deep connection with an accompanying feeling of comfort his images are ultimately familiar to us.

Another reviewer called Jervis a playful thinker, whose paintings invite and reward our involvement. 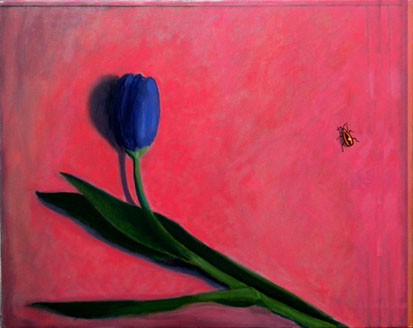 Tulip/Beetle, 24″ x 30″ – oil on canvas
Denise and I completely agree. Paul has the rare gift to present both the playful and profound in daily life. We’re thrilled to be able to surround ourselves with his art once again. And you’ll be pleased to spend some time with it this summer. Don’t miss Paul’s show.

This exhibit opens Saturday, June 30th and will be on view that day from 11 AM-7 PM with a reception beginning at 5 PM and then daily 11 AM – 5 PM through Friday, August 3rd.

If you have any questions about Paul’s work or this show or any of the other work we show, please don’t hesitate to contact us:

FOLK ART: THE DIRECTION THE WIND IS BLOWING IN THE ART WORLD

On Saturday, May 26th the Church Street Art Gallery presents an exhibit devoted to American Folk Art, a rich and often-misunderstood art form. We’ll be presenting a fascinating and exciting assemblage of some of the best examples of Folk Art. It’s an exhibit whose breadth reaches beyond the ubiquitous weathervanes one expects to see.

Over the last century, experts and passionate collectors of Folk Art have made great strides in separating the ordinary from the extraordinary, creating standards for what seems on the surface to be naive and untrained. Folk artists are largely self-trained, and always have set out on a personal and unique path to express themselves. Their work is often considered â€primitiveness€ in execution and technique. But the works on display at the Church Street Art Gallery make the point that these artists share a rare gift of being able to communicate excitingly and vividly the passions and obsessions that caused them to create art in the first place.

It’s always exciting to see how ingenious these artists are in their use of everyday objects and in their unique styles of painting. One of the most familiar examples in the 20th century are the paintings of Grandma Moses. With her deceptively simple use of space and subject matter she created storytelling moments of her life in pastoral New England.

Works by artists who are becoming recognized as outstanding talents are often commanding the kind of prices only the best works of traditional art once commanded. A small painted folk art carving of a heart and hand, sold at auction in 2003 for $79,500. Probably the most famous of all American folk paintings, The Peaceable Kingdom was painted in multiples by the Pennsylvania Quaker Edward Hicks. The last of the 65 versions, done in 1849 for his daughter just before his death, was sold in at Christies this year for $6,176,000, setting an auction record for American Folk Art and for Hicks.

This worthwhile exhibit at the Church Street Art Gallery opens Saturday, May 26th in conjunction with the Lenox Art Walk and will be on view that day from 10-7 with a reception beginning at 4 and then during regular gallery hours Mon-Thu 11-2:30 and Fri-Sun 11-4:30.

The exhibit features paintings, weathervanes, whirligigs, found objects and other fine examples of Folk Art. The Church Street Art Gallery is owned by Michael and Denise Ulick, passionate collectors of Folk Art for decades. The Gallery has been exhibiting Self-Taught, Outsider and Folk Art in the Berkshires since 2003.